State of the Union & the future of data

From 6-8 May 2021 the high-level State of the Union event took place in Florence, Italy discussing Europe’s position in a changing world. Opened by the president of the European Commission, Ursula von der Leyen, its focus has been on today’s most pressing challenges in Europe, such as geopolitics, peace and human rights, public health, artificial intelligence, climate and Europe’s position in the global economy.

Europe’s response to the global battle over data

The annual summit for high level reflection on the European Union also put a focus on Europe’s efforts to implement the Digital Single Market in the 10th edition of the event. A major topic discussed has been the “The global battle over data” with the Commissioner for Competition and Executive Vice-President of the European Commission, Margrethe Vestager.

The Commissioner outlined that today data is being created everywhere and that nowadays everything is being digitalised. This refers to mobility, electricity, agriculture, as well as to health systems. She called up that we can do better in Europe, innovate more, and establish businesses. Margrethe Vestager highlighted that Europe’s drivers for a successful EU Single Market are its high number of patents coming from Europe as well as its vibrant startup community. Furthermore she stated that Europe is not lacking behind in digitalisation and that data does make the difference.

Our challenge for the future

The only challenge due to the Commissioner for Competition and Executive Vice-President of the European Commission is to make sure is that data is being pooled, shared, and used for the better.

Topio.market, the first European digital marketplace will highly contribute to this overall political goal. With the set-up of an inclusive, fair, and simple marketplace everyone can trade, share, and use data in one central platform. Topio will contribute to strengthen especially SMEs to grow their channels and outreach. 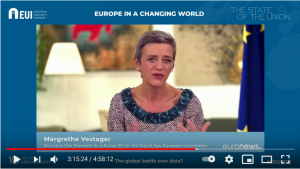 The State of the Union has been organised by the European University Institute EUI and broadcasted via Euronews. A recording of the event can be watched at: https://www.youtube.com/watch?v=hAji9X0LA-U&t=11405s

The Topio marketplace is set to commence beta operations in 2021. Data owners will be able to participate free of charge for its first three years in operation, and all early users can take advantage of free hands-on training and onboarding. More information about the Topio.market are available at https://topio.market/ or via the LinkedIn channel here

Opertus Mundi in the spotlight at the Geospatial World Forum 2021